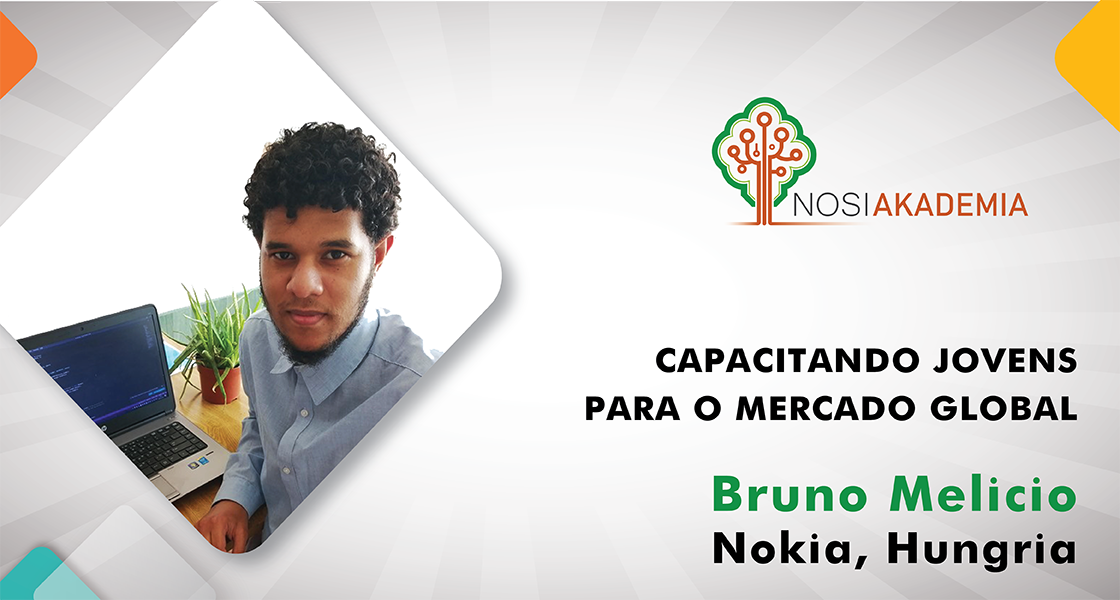 Bruno Carlos dos Santos Melício took part in the 2nd edition of the NosiAkademia Professional Internship Program in 2019. For the past 9 months he has been living in Budapest, the capital of Hungary, where he has been working as an Artificial Intelligence Engineer at Nokia.

As everything happened? Through the General Directorate of Higher Education, he was eligible for a scholarship for his Master in Computer Science with specialization in Artificial Intelligence at Eötvös Loránd University, and currently works with a 6-month contract in the Software department of Nokia. Having always been curious and eager to learn, he became an intern at the NOSi System Platform Department, where he learned the potentialities and applications of Artificial Intelligence (AI), as well as several programs involving Cloud Computing, he says. For Bruno, the only challenge is learning the Hungarian language but being fluent in the English language he manages to communicate with people

Regarding AI, Bruno is optimistic that although Cabo Verde is still in its early stages, it does have the potential to create innovative solutions and carry out startups using AI. Besides, NOSi, as a national reference entity in technology, with technicians and collaborators qualified in this expertise, stands one step ahead.

While interviewing, the student who represents the Cape Verdean face worldwide, explains how the internship helped his successful professional career:

NOSi Akademia was my first contact with the job market within my training area. It helped me to develop skills suited to my professional goals and to the demanding needs of the market, as well as providing me with unique experiences that enriched my curriculum. In fact, I also learned about Cloud Computing and how to apply Artificial Intelligence in companies, knowledge which I still carry today

During this period, what technological projects did you collaborate on?

uring such period I had the privilege to take part in three technological projects, namely the  NOSi Cloud, a platform that offers Cloud services (IaaS, PaaS, SaaS), in which I was in charge of further development; NOSi Brain, a platform that provides intelligent services based on Artificial Intelligence algorithms, I was responsible for developing services such as Facial Recognition, Chatbots, among others; NOSi Cast, a streaming platform with educational content, where I had the task of developing an intelligent algorithm for video recommendation.

What are the greatest challenges faced?

The major challenge was to harmonize the internship with the studies. At that time, I was preparing my graduation work and the deadline was June, however I had to be responsible and respect the deadline of the projects I was doing at NOSiAkademia.

Yet another challenge was to maintain a project already underway. Despite being well documented, it was not easy to understand the logic behind the code written by other people. Beyond that, the technologies used were relatively new to me.

Both challenging times were difficult yet necessary for my professional and personal growth, and I learned how to resist the pressure.

What benefits has the professional internship brought to your international career?

It was indeed crucial to deciding my area of expertise, Artificial Intelligence (AI). In spite of my interest in it, my aptitude for Web Programming created doubts about continuing a career in AI.

I applied for an internship in Software Development. However, when I realized the functions performed by my colleagues in the Platform and Systems Department, I decided I wanted to be part of it.

I made an important choice as I had the opportunity to apply my AI knowledge to practical problems, which was a relevant factor to choose it as the professional career to pursue.

Which message for the other young people?

A message to young people: Dare to dream out loud! Don’t let the fear of failing stop you from fulfilling your greatest desires. Believe in your potential! With faith, dedication and humility, everything is achieved regardless of the challenge. And remember: “The difference between success and failure is one more time. (Ken Poirot)